Blue Soul is a collaboration between guitarist Dave Stryker, saxophonist and arranger Bob Mintzer and the WDR Big Band. This is a unique project putting Stryker’s soulful guitar in front of a world-class big band led by Mintzer’s creative arrangements and playing.

After several appearances as a guest with Dave Stryker’s Organ Trio, saxophonist Bob Mintzer (who serves as the principal conductor for Cologne, Germany’s WDR Big Band) had the idea to arrange some of Dave’s music to feature him with the ensemble. Bob thought Stryker’s hip takes on ‘70s pop tunes from his Eight Track series as well as his originals would be a good fit for the dynamic big band. In March of 2019, Dave was invited to Germany for a week of rehearsing, recording and performing with the WDR Big Band, the result of which is Blue Soul.

“Bob is one of the best musicians and people I know,” said Stryker. “I’ve been a fan of his playing since my early days in New York City, and to get the chance to have Bob arrange and play my music with the incredible WDR Big Band is a huge thrill and honor.”

Stryker, one of the top jazz guitarists on the scene, got his start with Jack McDuff and Stanley Turrentine and to date has 30 albums to his name including the recent #1 JazzWeek recording, Eight Track III. Mintzer is one of the greats of the tenor saxophone with many of his own recordings as well as long associations with the late, great Jaco Pastorius, the Yellowjackets and many others. 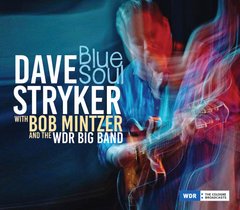 Why Sharing Academic Publications Under “No Derivatives” Licenses is Misguided

Mountain View, California -The benefits of open access (OA) are undeniable and increasingly evident across all academ…

Cajon, California -Taylor Guitars is proud to announce the launch of an exciting new Urban Wood guitar initiative. Developed in partnership with West Coast Arborists, Inc., the initiative gives select trees in need of removal from California cities a secon…